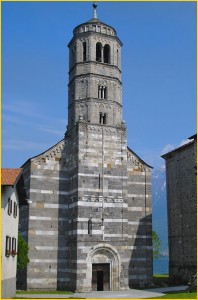 The itinerary begins with the visit of the former Augustinian monastery of S. Maria delle Grazie, built in 1467 on a former oratory; this monastic centre was a place of extraordinary painting industry of which the church maintains the highest examples, with its Renaissance frescos. The tour continues with the visit of Livo, an ancient rural village. After a short walk among the thick chestnuts you can reach the old church dedicated to S. Giacomo showing an example of the architectural model arches-tympanum which was widespread in the all Alto Lario in the late XV century. Inside the church there is a rich decorative cycle of  devotional frescos of the XVI century. In the afternoon you can visit the church of S. Vincenzo in Gera Lario, showing features of the XV century. Inside the presbytery there are some frescos of particular interest that represents the affirmation of the Renaissance style in its highest forms. The day will end with a visit to Montemezzo, where the church of S. Martino offers at its interior a vast pictorial cycle dedicated to the Crucifixion, for many years attributed to Luini.

Contact us now to book your fabulous holiday on the shores of Lake Como.